Learn how Australians feel about using the Internet of Things (IoT) in the home with Savvy’s 2022 smart home technology survey.

Older Australians aged 55 to 65+ years have embraced smart home devices and become more tech-savvy, according to new statistics. But they are not the only ones taking advantage. Savvy surveyed 1,000 Australians to see how they feel about using the Internet of Things (IoT) in the home.

What do the statistics say?

Older Australians have experienced a considerable change in their digital habits. Almost half of them (48%) now own one or more smart home devices and have spent between $1,000 and $2,500 on IoT technology. 41% currently have 5-10 connected devices.

This suggests that generally, members of this generation can be described as tech-savvy. They rely on IoT devices for safety and security, to manage and control their appliances remotely and to stay connected with family and friends. 75% of boomers and seniors have purchased smart security devices, while home entertainment products (53% ) and smart hubs and assistants (47%) follow closely behind.

In comparison, the adoption of smart home technology is also prevalent from the ages of 18-24 and 35-44, with 58% relying on the IoT. Connectivity, home entertainment and security make up the top IoT product groups for these respondents. The data showed 33% of older Australians still lack confidence and feel they are not tech-savvy enough to understand the risks of smart devices. These respondents choose not to use smart home devices because they do not believe they can protect themselves accordingly.

44% of Australians across all age groups say they do not intend to invest in smart home devices because the products do not fit their needs. Privacy concerns are also a problem and deter many from buying devices for their homes. 21% of respondents are concerned smart devices are insecure.

Safety is the biggest motivator, followed by convenience and control

47% of respondents said increasing their safety and security is the main reason why they have chosen to invest in domestic smart technology.

Devices such as smart locks, cameras, video doorbells and security systems are the top purchases, while 44% are investing in IoT for the convenience and control of managing their devices remotely. The ability to monitor and control appliances, white goods and even gardening products with the push of a remote button or a voice command is popular across all age groups. Despite safety and security being the top motivators, 13% of boomers and seniors have admitted their devices are not protected, taking no security measures or action to protect themselves from cyber-attacks.

60% of seniors surveyed do use strong passwords, but only 8% use multiple measures such as two-step verification, router protection, VPN blockers, regularly updating devices and turning devices off when they are not in use.

Smart doorbells and security systems are among the most vulnerable household items for cyber-attacks, yet 68% of respondents are still unsure about whether they are comfortable or uncomfortable with these risks. While these devices are designed to make our lives easier, they are also becoming the new weapons of choice for scammers, hackers and perpetrators of domestic and family violence, so secure devices are paramount.

Lack of user security awareness is a common exposure of smart devices to vulnerabilities and cyber-attacks. Fortunately, 14% of respondents say this is not a concern for them with their IoT devices.

Cost and privacy issues remain among the respondent’s top concerns. 49% say they cannot afford the investment, while 82% worry about privacy and the collection of data and personal information. Surprisingly, only 8% are concerned about the mental health impact smart technology has on kids, teenagers and young adults.

As for whose responsibility it is to protect domestic IoT devices from hacks and privacy breaches, 89% of boomers and seniors say it’s on everybody, including users and consumers, device manufacturers, device sellers, Internet providers and the Government, while 20% of all respondents feel it is only the manufactures.

32% of respondents have chosen not to invest in smart home devices because they are concerned about security breaches and the possibility of being spider on, harassed or having their personal information hijacked. Those interviewed stated they were considering paying for new devices either out of their own pockets, by drawing from mortgage offset accounts or by seeking a personal loan. Younger generations are also on IoT devices, but the highest use is from boomers and seniors

Australian children have been using smartphones more than ever in the last few years to play games, take photos, watch YouTube videos and keep in touch with their parents. But where do they sit with other connected devices in the home?

The survey shows 28% of IoT users are 5 to 10 years old. Toddlers are also accessing smart devices now with 16% under the age of 5. This suggests smart devices are playing an increasingly prominent role in the lives of preschoolers, despite the risks and digital technology being a challenging space to navigate.

18% of young IoT users are female, while there are more male children from 5 to 10 years old who use Internet-connected devices at home (13% vs 11%).

The Australian Capital Territory (24%) and Western Australia (20%) have the highest number of IoT users under the age of 5, followed by South Australia (18%). Children IoT users from 5 to 10 years old are highest in the Northern Territory (20%). 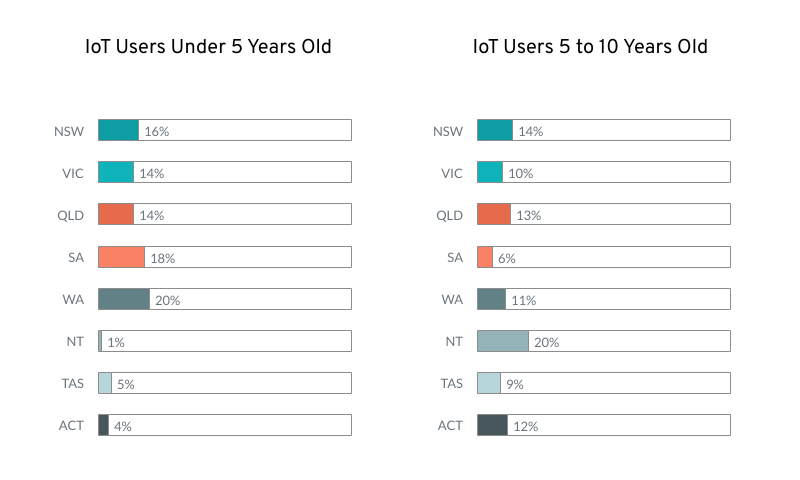 Sustainability and energy management are growing motivators for IoT users, with eco-smarts on the rise

While safety, security, convenience and control top the reasons why Australians invest in smart devices, a growing number of users are also prioritising sustainability.

23% of respondents adopt smart home technology to track and reduce energy usage, save money on utility bills and create a more eco-friendly household. Products such as smart energy devices and climate appliances are popular investments. 37% of users buying smart devices for sustainability are 18 to 24 years old, while 23% are 35 to 44.

This could suggest a shift in consumer preferences. As more Australians accept responsibility for sustainable living, the need for energy-efficient homes is no longer a current trend during a smart home boom, but a much larger movement towards long-term sustainability. Smart homes are important in reducing energy use. Collectively, consumers are visibly taking steps in the direction of home automation for a greener future.